Weighted blankets are among the most popular products to improve sleep. Sleeping with a weighted blanket can have unique therapeutical benefits coupled with the feeling of deep relaxation. This sets them apart compared to traditional blankets. 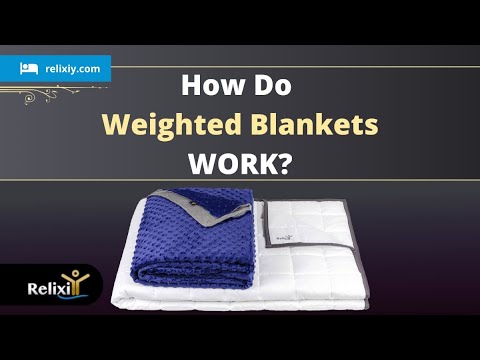 How Do Weighted Blankets Work?

Weighted blankets use deep touch pressure stimulation to naturally stimulate the production of the hormone of happiness (serotonin), increase the hormone regulating sleep (melatonin), and reduce the stress hormone (cortisol). This helps to improve sleep, reduce stress and anxiety, and provide an overall feeling of safety and relaxation.

A weighted blanket combines the soothing effect of an ordinary blanket with the therapeutic effect of deep touch pressure (DTP) to provide a calming effect.

When used, the weighted blanket exerts gentle pressure on the body, naturally stimulating the brain to release serotonin and dopamine. Those two important neurotransmitters are responsible for making people feel happy and relaxed.

Moreover, serotonin is naturally converted into melatonin, which regulates sleep.

The calming effect of the weighted blankets is similar to that of a firm hug, swaddling, or even massage. This is why those blankets are often referred to as the hug blankets. It’s because of the pleasant feeling they give!

Initial scientific research provides encouraging evidence about the benefits of weighted blankets. Large-scale studies are still missing, so the research is still considered incomplete by scientists. However, millions of people are already using weighted blankets, and they published hundreds of thousands of positive reviews all over the world.

Get The Relixiy Weighted Blanket

What Is the Science Behind Weighted Blankets?

Weighted blankets work by creating a gentle, but firm and consistent compression that provides a deep pressure stimulation. This gives the same feeling experienced during massages, or when receiving a hug.

The deep touch pressure (DTP) exerted by a weighted blanket activates the parasympathetic nervous system (PSNS), which, among other things, regulates the sleep cycle.

Studies have shown that weighted blankets can be effective in improving sleep and reducing anxiety. For example:

Those are just 2 of the many scientific studies demonstrating the effects of deep pressure stimulation.

While the research is extremely promising, the scientific community believes that it is still too early to reach any final scientific conclusions. This is because the currently available studies are still in the initial phase, and for this reason, they generally involve only small groups of volunteers or patients.

However, while it is true that there is no large-scale scientific research available on weighted blankets, it is also true that millions of people are already experiencing and feeling the benefits of using them. This is reflected by a large number of enthusiast reviews available online about weighted blankets.

Weighted Blanket Therapy: When was it used by doctors?

For many years doctors used weighted blankets to treat patients (both adults and children) with special needs such as autism, severe anxiety, OCD, as well as post-traumatic stress disorder (PTSD).

They discovered that such patients were easily relieved with the weights of these blankets as a result of the deep pressure stimulation they experienced.

Weighted blankets were initially manufactured and used only for therapeutic purposes, however, now they are available for everyone to enjoy!

what is a weighted blanket?

A weighted blanket is a heavy blanket used for its therapeutic effects. Those heavy-weight blankets usually weigh between 5 and 12kg.

Like a hug, those special heavy blankets have a calming effect, helping to relax, reduce anxiety, and enhance sleep.

Premium weighted blankets like Relixiy® come with a removable luxury cover with a different texture on the 2 sides to enhance the sensory experience. This also helps relaxation, improves comfort, and makes keeping the weighted blanket clean easier.

What are the Benefits of Sleeping With a Weighted Blanket?

A weighted blanket can often provide game-changing benefits already after its first use. However, in some cases, you will gradually start feeling better within 1-2 weeks of sleeping with it.

Here are the most popular weighted blanket benefits:

how heavy should a weighted blanket be?

Weighted blanket weight recommendations are ranging between 7 and 12% of the user’s body weight. With the preference of most people being around 10% of their body weight.

For example, ask yourself those questions:

That’s why at Relixiy® we recommend choosing a weighted blanket that is between 7 and 12% of your body weight. This recommendation is based on data and direct feedback we received from our customers regarding how their weighted blanket weight feels.

Get The Relixiy Weighted Blanket

As general guidance, you can use the table below to have a quick look at the right weighted blanket weight for you. However, to get a more accurate recommendation, I suggest using the calculator available in the previous section.

Who should not use a weighted blanket?

Weighted blankets are safe for most people and can provide comfort, relaxation, and many other benefits. However, they can also pose a potential health risk for people affected by specific conditions.

This is especially true for people with those conditions, for which we recommend you to consult your doctor before using a weighted blanket:

A weighted blanket may not be suited for especially weak people, because they may not be able to get out of the heavy blanket by themselves.

Finally, people that aren’t confident about their health should consult a GP before purchasing a weighted blanket.

How To Tie A Weighted Blanket Cover (The EASY way)

Hi, Relixiy® is a leading weighted blanket brand in the United Kingdom, helping people in the UK to improve sleep, and get relief from stress and anxiety. Our weighted blankets proved to be very effective also in improving the lives of people affected by insomnia, fibromyalgia, autism, OCD, ADHD, PTSD, as well as adults and teenagers with special needs.

Get back your dreams with Relixiy®!